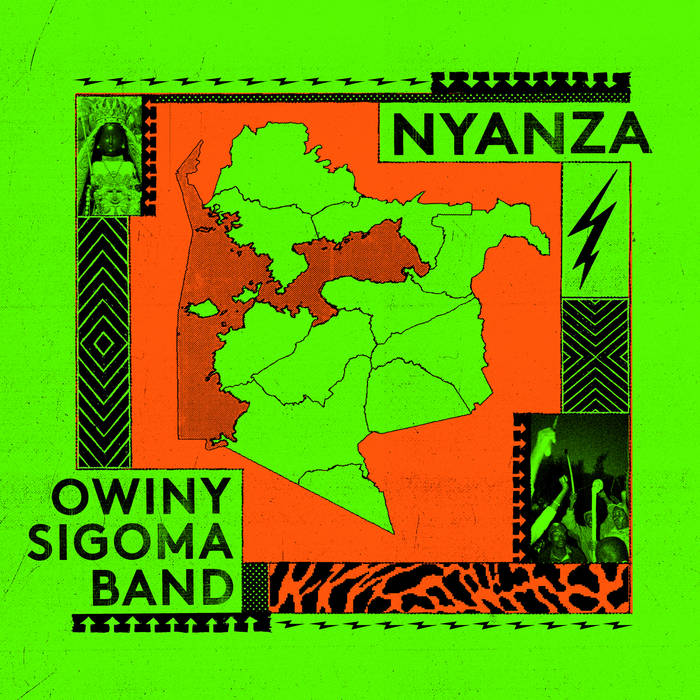 Twistedsoul The genre-defying Owiny Sigoma Band are back with another taste of their electrifying sound.'Nyanza' is proof that there's still nothing quite like the Owiny Sigoma experimental, funky, unique – and thrillingly out-there. Favorite track: Changaa Attack.

Andrew Jervis The Luo and the Londoners go pogo. Favorite track: I Made You, You Made Me.

‘Nyanza’ is the third album from the cross-cultural, boundary surpassing Owiny Sigoma Band. For their third offering, the band travelled to the Nyanza Province of Western Kenya - home of their two members Joseph Nyamungu and Charles Owoko - to explore the birthplace of Luo music.
A complex, constantly evolving, musical relationship now in its fifth year, the project has seen the band producing music in both Kenya, for their self-titled 2009 album, and in London with the second Power Punch LP. The group features Nyatiti master Joseph Nyamungu and Lou percussionist Charles Owoko, both from the Nyanza Province in Western Kenya, as well as London-based musicians Tom Skinner (drums), Jesse Hackett (vox/keys) and Louis Hackett (bass).
Nyanza, is loosely arranged as a narrative following their trip to ‘Luo Land’. From the first track, ‘(Nairobi) Too Hot’, which tells a tale of running to the hills and escaping the hectic city life, to the hypnotic Nyatiti sounds of ‘Owour Won Gembe’ and the rapturous ‘Changaa Attack’, the album follows the band’s experiences as they head up the country to Kisumu and Nyanza Province. The albums centrepiece “Nyanza Night” tells the story of the night they played a show for Joseph and Charles’ village for the first time, followed a 12 hour Nyatiti sound clash - Drummer Tom Skinner recalls “This went on for hours, really heavy music and a lot of Changaa (Changaa - also called “Kill Me Quick” is a homebrew rumoured to contain jet fuel and battery acid). This was one of the most magical nights that I’ve ever had. In the middle of nowhere, in the outback of Kenya, under the stars. I don’t think I’ve ever really felt so far away from my normal life.”

Mirroring their journey, the music on this record see the band move forward sonically, rolling through a myriad of influences from dub, techno, and dance in a way that all feels completely natural and at home alongside the traditional Luo sounds. Much of the instrumentation was recorded at their rented house in Kisumu - listen carefully and you will here many ambient sounds from chickens to rainstorms. The result is a string of striking tracks, the music always feeling raw and organic, the rhythms and sounds reflecting the spontaneous jams from which the record was born.

Nyanza is a truly unique record, a faultless melting pot of disparate sounds, one that reflects the ambience and energy of the environments in which it was made. Arresting electronic grooves fit side by side with soft Lou singing and traditional Nyatiti music to create yet another pivotal moment in the turning cogs of this intoxicating, often surprising, soundclash.

A collection of gloriously hypnotic Afro grooves symbolic of the true culture clash between the Luo and London.

Bandcamp Daily  your guide to the world of Bandcamp